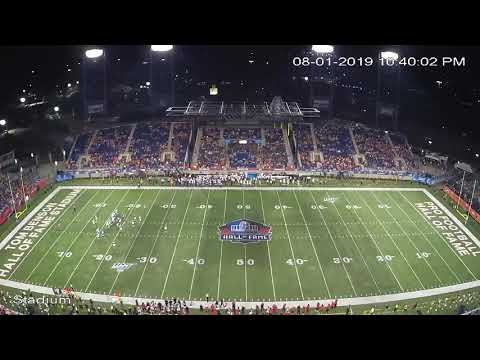 The spectacular Tom Benson Hall of Fame Stadium  recently served as a world-class setting for Enshrinement Week Powered by Johnson Controls. The smart, safe, sustainable and connected stadium is a one-of-a-kind sports and entertainment complex, profiled by Forbes as one of the “13 Game-Changing NFL Stadiums.” The stadium is outfitted with the latest technology and advanced solutions from Johnson Controls and its partners, and is the first visible sign of why the Johnson Controls Hall of Fame Village is “The Most Inspiring Place on Earth."

This sports and entertainment venue boasts a future-ready, state-of-the-art network infrastructure, ensuring the systems implemented within are not only smart and sustainable today, but support any future innovations. In addition, the integrated, data-enabled smart building technology solutions deployed in the stadium are designed to turn data into insights and insights into actions, delivering enhanced fan engagement, greater operational efficiency, enhanced security, and sustainability. Thanks to an explosion of data and the development of technology to collect and understand it, buildings like Tom Benson Hall of Fame Stadium can come “alive,” automatically responding to the environment, the needs of fans, and the ongoing requirements of efficiency and sustainability.

About 700,000 fans descend upon the Johnson Controls Hall of Fame Village during Enshrinement Week Powered by Johnson Controls. The high-tech stadium was designed to deliver a smart, safe, sustainable and connected experience for fans during one of the biggest weeks of the year for pro football fans.

In addition to the esteemed Class of 2019, more than 130 Gold Jackets (living Hall of Famers) returned to the Hall of Fame to be a part of Enshrinement Week Powered by Johnson Controls. Nowhere else are fans able to see and interact with as many Hall of Famers in one place, at one time, as in Canton during the annual celebration.

Hall of Fame Fun Fest, Aug. 1-4
The Official Tailgate of the Enshrinement Festival on the Field Turf of the Hall of Fame.

Enshrinee Roundtable, Aug. 4
An intimate conversation with the Class of 2019 inductees. Personal and motivational stories, anecdotes and exclusive “locker room talk” from the game’s greats!

Products and Solutions
Service and Support
Industries
About Us
Insights
Events
© 2021 Johnson Controls. All Rights Reserved.